The three local hares who hared that hash last week have finally located Hash Boy almost a week after he went tragically missing during a shortcut gone horribly wrong. The infamous SCB Hash Boy was found lying on his back in a drainage ditch alongside a busy freeway, with his spindly arms akimbo and his stained and dented torso lodged against an abutment.  Unfortunately, passing motorists were unable to see him as he had been completely obscured by a huge patch of poison oak. 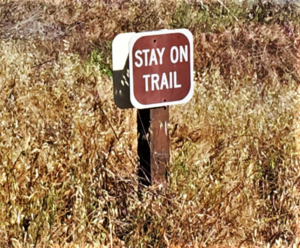 After chugging down a cold beer provided by his rescuers, a dehydrated Hash Boy explained that he had been shortcutting solo during the hash when he collapsed due to the massive weight and bulkiness of all the hashing accessories, trinkets and haberdashery that was contained on his person.

Shocked rescuers inventoried the following items that Hash Boy was wearing/carrying when found.